Photo: The Julian Alps
An idyllic village at the foothills of the Julian Alps between Bled and Pokljuka, Gorje will attract you with its genuine village vibes, magnificent natural landscape and rich cultural heritage. It invites you to discover the traditional crafts of Gorenjska and the natural pearls that have built the environment. The pearl among them is most certainly the Vintgar Gorge.

Gorje – the gateway to the mountainous world of the Julian Alps

Gorje is the entrance to the Julian Alps and to the Pokljuka and Mežakla plateaus. The village was known for its bell-making tradition that has been preserved at the Šobrl workshop in Poljšica. You can find out more about the bell-making tradition at “Pogvajnova kovačnica”, a preserved smithy at Višelnica. Bells have a special role in Gorje because they have been integrated into the municipal coat of arms.

The mighty sounds of bell ringing can be heard from the parish Church of St George in Zgornje Gorje that has a typical bronze bell that also resounds in the most famous chant from Gorje. The Church of Poglej has a different story – it is actually not a church but a rock cave, known as one of the oldest archaeological sites in Slovenia. Today, it appeals to sport climbers.

The green surroundings offer amazing wonders of nature, including the picturesque Vintgar Gorge and the Pokljuka Gorge. Go cycling or walking from the villages of Gorje to the Radovna River Valley, which takes you all the way to the foothills of the Julian Alps. 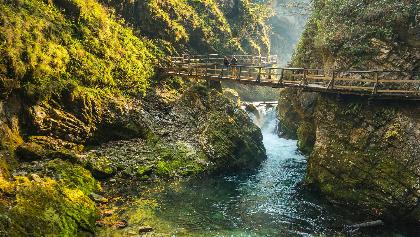 Take a round trip offering an interesting trail alongside the gorge and the slopes of Hom hill – from here you will able to see the Ljubljana basin, the Karavanke mountains and the Julian Alps.

The stage starts at Lake Bled and continues through Gorje, the Pokljuka Gorge and a few steep ascents over Kranjska planina Pasture and Planina Javornik Pasture in the heart of the Pokljuka Plateau, and ends in Goreljek at the Sport Hotel.

closed
From Bled to Vintgar

The Vintgar Gorge, carved out by the Radovna river, is one of the most visited natural landmarks in Slovenia. The area of the gorge belongs to the Triglav National Park.

This is a perfect tour for cyclists who wish to visit sights and explore new places, learn about the life of locals and enjoy in beautiful views of the mountains.

This cycling tour takes you to the magnificent valleys of the Julian Alps. You will enjoy in the views of the only national park in Slovenia, i.e. the Triglav National Park.

Cycling on the Pokljuka

This cycling tour takes you mostly along stone roads on the Pokljuka plateau which is surrounded by forest.

An easy hike across the Pokljuka around the peat bog that is one of the southernmost bogs in Europe. The info board provides information about the flora and fauna of this sensitive habitat area.

Responsible for this content
The Julian Alps  Verified partner