Long distance mountainbiking loop around and accross the Julian Alps

The Juliana Bike Mountain Biking Loop is the younger sister of the Juliana Trail and part of the Slovenian Mountain Biking Route. Seven stages run counter-clockwise and together form a circle along the edges of the Julian Alps. With access stages from three directions, this trail shares similar panoramas and views of life in the Julian Alps to the footpaths along the Juliana Trail. The marked mountain biking loop takes you along local roads, biking trails, forest trails or unpaved roads and also demands respect for nature, plants, animals and other sensitive natural habitats, as well as the local people who live sustainably in the protected UNESCO – Man and Biosphere natural environment and Triglav National Park. 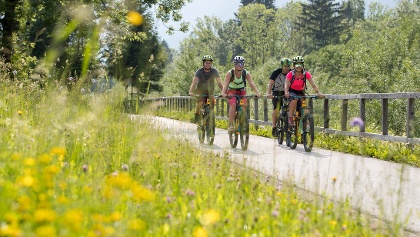 THE JULIANA BIKE MOUNTAIN BIKING LOOP is the younger sister of the Juliana Trail and is basically the part of the Slovenian Mountain Biking Route; ...

from Julijske Alpe,   The Julian Alps

Juliana Bike is designed on the north-western section of the STKP route, which is artfully woven into a ring that can be cycled in a circular and fully contiguous manner. The section from the Vrh Ravni crossroads above Zakojca, over the Otavnik mountain and along the steep forest trail below Porezen to the descent to Podbrdo links the STKP into one of the most beautiful rings of long-distance mountain bike routes. Here it is also possible to ascend on foot to the hut on Porezen and descend along the northern branch of the STKP straight to Petrovo Brdo. The attraction of the Juliana Bike also lies in the access stages and its long-distance biking network of the Julian Alps Association: the Juliana Bike Network. This project is the remarkable result of long term cooperation at all levels.

Juliana Bike starts in Bohinj: along the Sava Bohinjka to Lake Bohinj, then uphill to Pokljuka

The slow start of the stage is perfect for an idyllic morning warm-up on the bike through the Bohinj valleys, but you'll have a few challenges ahead of you as you climb to Pokljuka.

From Bohinjska Bistrica, follow the cycle path along the left bank of the Sava Bohinjka to Lake Bohinj and see the monument to the first climbers of Triglav in Ribčev Láz - don't miss the iconic view of the lake from the bridge by St. John's Church and, if you can, look out for the white devil in the famous church - maybe there's more than one!? In Stara Fužina, visit the Alpine Museum, then climb to the high mountain plateau of Pokljuka, dotted with picturesque mountains and high moors.

From the embrace of the mighty spruce forests of Pokljuka, you descend into the Radovna and Krma valleys.

We stop and listen to stories about the old days in Pocar's homestead and then in the Slovenian Mountain Museum in Mojstrana, which takes us on a rich exploration of mountain worlds.

On the road along Pišnica to Vršič, we come across the famous Russian chapel, a tribute to the dead Russian prisoners, and then we head through Vršič to the Trenta valley, where we can turn off to the source of the Soča River. In Trenta, you should visit the centre of the Triglav National Park and the botanical garden, and then drive along the emerald Soča River through Čezsočo to Bovec.

The stages lead us further into the Krnsko mountains to the Kuhinja mountain and the Church of the Holy Spirit in Javorca.

First, the trail goes along the Soča River, then up through the villages below Krno to the sunny Kuhinja mountain, then up the difficult climb to the Pretovč saddle, where we then descend through the Zatolminské mountains and then along the Tolminka River to Tolmin.

The next interesting stage takes us first steeply uphill to the Prehod Pass, then on foot to Porezen, and then downhill to Podbrdo.

From Zakojca, we head to the Vrh Ravni saddle and cycle past the sunny Otavnik mountain to the Prehod Pass. Then climb on foot to the scenic Porezen. After that, it's a long, initially steep, descent to Podbrda in the Baška Grapa.The ascent and descent from Baška Grapa via Sorica and over Soriška planina into the Bohinj basin - from Primorska to Gorenjska.

From the tight Baška Grapa, we leave the Primorska world and head up the vast slopes of Sorica, up to Soriška Planina and through the vast forests and down through the mountains to the Bohinj Basin.

When designing the route, we have also thought about the possibility of accessing the route by bicycle from places that are a little more remote, but still well-known as tourist destinations, in three access stages: Radovljica - Bled - Gorje - Radovna, Žirovnica - Jesenice - Mojstrana and Goriška Brda - Tolmin.

From Pokljuka in the valleys of Radovna, Krma, Vrata and upstream the Sava River to Kranjska Gora

To the Kuhinja pasture in the Krn mountain range and to the Church of the Holy Spirit in Javorca.

Steep uphill ride to Prehod Pass, walk to Porezen and downhill to Podbrdo

You can start the stage in Žirovnica by visiting the birth house of Matija Čop(the first Slovenian literary historian) and then continue over the ...

The southern access trail to Juliana Bike from the Goriška Brda hills opens anew view to the connection of the Mediterranean with the alpine world.

from Julijske Alpe,   The Julian Alps

Make the most of first-hand information and let us organize your outdoor experience in the Julian Alps. Our local experts will be happy to prepare a tailor-made programme for you, including accommodation, luggage transfers and private shuttles.

Mobility in the Julian Alps

No matter whether you arrive by train or bus. The Julian Alps are well connected. Read more about mobility options in the Julian Alps and about the benefits cards provided by some destinations for your convenience.

Promotional branded merch for the fans of the Juliana Trail and the newly opened Juliana Bike.

The entire route (except for the access stages) is well marked: blue arrows directing you to the next characteristic point with written information (distance to the point, altitude of the board and the logos of the Julian Alps Association and the STKP (Slovenian Touring Bike Route) and sometimes also the Trans Karavanke), blue signposts and blue & white mountain biking markings marking the route.

For detailed information, click individual stages (or overall loop description). There you can also download the GPX track, print out a stage map, see a 3D flight (PRO feature) and possible updates or detours when applicable.

Although the Juliana Bike route was only opened in June 2021, the experienced cyclists who have already cycled the entire route, rated it as potentially one of the most prestigious touring bike routes in Europe, if not the world. It has everything a touring cyclist would want in an adventure: outstanding scenery, remoteness, relatively strenuous course, but still close to friendly and hospitable people and with adequate tourist infrastructure, just right to keep the traveller on the safe side.

Explore and experience the rich diversity by pedalling throughout the Juliana Bike Network - the secondary grid with more than 600 km of mountain bike routes in the Julian Alps.

The official routes will take you along the existing side roads and trails. While they are not signposted in nature, each of the trails is fully digitised on our website. Check details, GPX tracks and other important information to plan a tailored combination of trails for your next outdoor adventure in the Julian Alps.