Mala Osojnica offers one of the most iconic views of Bled with the Karavanke range in the background, whereas Ojstrica above Velika Zaka stuns with the mesmerising view of Lake Bled popular amongst photographers.
moderate
Distance 2.4 km
Duration1:00 h
Ascent246 m
Descent246 m
Mala Osojnica rises steeply above the southwestern part of Lake Bled. It is part of a bigger Bled monadnock hill called Osojnica. The eastern approach to Mala Osojnica is a rather difficult one, but stuns the visitor at the top with views of Lake Bled with the island, Bled Castle, Straža, Dobra gora, Kozarca and Obroč. In the background you can see Radovljica, the Karavanke, the Kamnik-Savinja Alps and the mighty Jelovica plateau in the south. In fact, Mala Osojnica is part of a smaller plateau with several viewpoints. Above it, there is the peak of Velika Osojnica in the west, which is covered by forest and thus does not offer any viewpoints. Above Camp Zaka, there is Ojstrica rising adjacent to Osojnica. Ojstrica is a smaller and lower hill – a very popular spot for visitors, especially photographers, due to its position and short climb.

Velika Zaka at the western shore of Lake Bled (475 m).

At the rim of a grassland along the road to Velika Zaka and close to the rowing tower there is a signpost leading you upwards through the deciduous forest. After a couple of minutes, you reach an unpaved path where you descend several metres   and cross a larger grassland behind a house, ascending in the steep areas of Mala Osojnica covered by forest. At the crossroads continue on a steep slope upwards to a rocky divider and then on to the steel steps until you get to the edge of a smaller plateau. Follow the trail on the left edge of the plateau towards the south. Take a left turn at all the crossroads and you will eventually reach the viewpoint on Mala Osojnica. The viewpoint is secured with a steel fence and there is a bench, info board and a signpost. Take a few steps upwards onto the path on the right edge of the plateau until you reach the second viewpoint above Bohinjska Bela. The path will take you to a valley and from there to a saddle between Mala and Velika Osojnica (signpost). Continue on this path/forest track downwards in the direction of Zaka. At the southern foothill of Ojstrica take a left turn onto a narrow, steep trail leading to the peak of Ojstrica. On the way back, take the same path until you reach a wide forest track, go across the grassland and take a left turn through the forest where you end up in Velika Zaka.

You can take the bus, or travel by train to the nearby railway stations of Bled Jezero or Lesce-Bled. For more info visit our website: http://www.bled.si/en/how-to-get-here

Velika Zaka, which is a 10-minute walk from the railway station, is the start and end point of this walk. You can also get to Velika Zaka by taking the tourist train that goes   around the lake. If you start the walk at the Lakeside Promenade on the eastern shore of Lake Bled (480 m), your walk will be 45 minutes longer.

You can get to the starting point in Bled by car from Lesce (Ljubljana-Karavanke motorway exit) or from other regional roads from Bohinj or Jesenice.

There are several public pay carparks in Bled: http://www.bled.si/en/how-to-get-here . 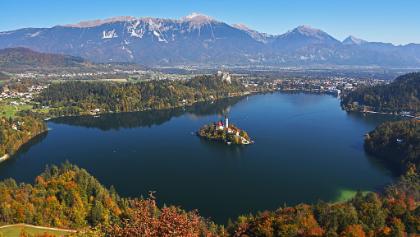