This stage goes uphill and downhill through chestnut woods and across old pasture land, and finally reaches Castelmonte, a pilgrimage destination with a shrine to the Virgin Mary. From here the trail leads steadily downhill into the town of Cividale del Friuli. The route is suitable for everyone, especially culture lovers, and presents no technical difficulties, but it should not be underestimated as it takes around six hours.
moderate
Distance 23.4 km
Duration7:30 h
Ascent536 m
Descent1,039 m

Making the long crossing from Tribil di Sopra through meadows and chestnut woods, you finally reach the Marian Sanctuary of Castelmonte, where you can then make your descent towards the town of Cividale del Friuli.

The Itinerary is not technically difficult although considerable challenges were encountered in developing the route.

There is an interesting visit to the fortified village of Santuario di Castelmonte, the destination of a Marian pilgrimage in September that sets out from Cividale.

Cividale del Friuli, the city that symbolises the Lombard dominion in Italy, is a UNESCO World Heritage site, and also offers numerous remains from ancient Rome and from Patriarchate of Aquilea.

The Mittelfest is the town's most important cultural event, a crossroads of central European art and culture, held in the first two weeks of July.

Don’t miss the many places to  savour the local traditional dishes, as well as the many local agri-tourism holiday farms and wineries.

Two of the most important historical re-enactments in Cividale include the Palio race of San Donato on the last Sunday in August, and the entrance into the city of the Patriarch on the first Sunday of January.

From Tribil di Sopra, at 642 m, we take CAI trail 747 and, standing high above the Judrio Valley, we reach the villages of Gnidovizza and Clinaz.

Beyond Clinaz, CAI trail 747 winds along the ridge that separates the Natisone Valleys from the Judrio Valley.

We pass just above the houses of Varch (Varh), then ascend to Monte San Giovanni, at 702 m, and the church of the same name.

From here we continue for a long stretch with numerous smaller ascents and descents, remaining close to the watershed line and a little above the road that leads from Tribil to Castelmonte, until we reach the isolated church of San Nicolò, at 670 m, crossing a cart road one kilometer further at the Dorgnac House, which descends towards the Judrio Valley (by taking the road on the right you can link with the Tribil-Castelmonte road [at a restaurant] to the left, which brings you directly down a gentle slope to the saddle below Castelmonte Sanctuary).

The CAI trail 747 goes down instead towards the Judrio Valley for almost 150 meters until it crosses another wide path coming from the bottom of the valley.

Following this path to the right we ascend to the saddle beneath Castelmonte Sanctuary and, continuing on CAI trail 747, we come directly to the entrance gate to the fortified village of the sanctuary, at 618 m. After an unmissable visit to the sanctuary, we descend to the large square below, where we take the SP31 for Cividale.

We follow the asphalt road for just over a kilometer and, after passing  twisty turns, (area of Case Moldiaria, at 489 m), we turn right along a wide dirt road that winds downhill through the woods for about 4 km until we reach the town of Purgessimo, at 159 m. We leave the village along Via Foscolo, we cross the SP19, and continue along Strada del Mulino, on the edge of the fields and the Natisone River.

After a couple of kilometers we go right at a crossroads towards Strada della Lesa, on a road that leads us to the initial houses of Cividale del Friuli, at 130 m. Still going straight ahead, along Via del Paradiso and Via Santa Chiara, we reach Piazza della Resistenza, where the end-stage totem is to be found. 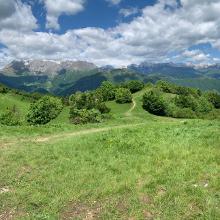 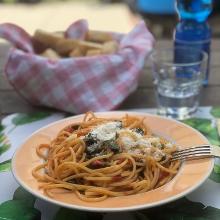 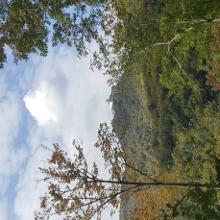