On this stage you can enjoy a charming journey between vineyards and orchards. The Brda region, a hilly landscape nestled between the Alps and the Adriatic, preserves and supports its traditions, protects its natural beauty and exerts a beneficial effect on its visitors.
easy
Distance 15.6 km
Duration5:00 h
Ascent437 m
Descent639 m
The enchanting Brda region is rich in tradition and fertile, and is situated at the point where three different cultures meet, namely the Slavic, Romanesque and Germanic. The local people (the women known as “Brike” and the men as “Brici”) are distinguished by their hospitality. In no way does the Brda region lag behind much better known and more highly frequented tourist regions such as Tuscany and Provence in terms of its oenological and gastronomic delights. Various old grape varieties have been cultivated here for a long time, but recently indigenous old varieties such as the Ribolla have started to take on an increasingly important role. The location, soil and climate of this region have enabled local wine growing and the art of pressing the grapes to mature to perfection.

In particular the whole of the region north of the towns of Cormons, Capriva and Mossa up to the gates of Gorizia has acquired fame as a traditional wine growing region. The Collio was originally a hilly region where mainly oak trees predominated, but the look of the landscape has changed a great deal: While the forest has been pushed back to the northern slopes, the southern slopes are now covered in extensive vineyards laid out in terraces. The alternating forests and areas prepared to be fertile for grape growing, together with the scattered cherry trees, create charming contrasts. As a result of the trees being cleared, the sandy, marly soils (flysch) that are typical of this region are not very stable, and heavy rainfall in particular can choke them. Keeping this sensitive balance requires constant care by the wine growers.

This stage starts in the fortified medieval town of Šmartno with its seven defensive towers. The major structural features of the 15th and 16th centuries have been largely preserved in the town, with ‘gase’ (narrow alleyways), ‘ganki’ (wooden balconies), ‘žbatafurji’ (‘spahnjenice’ or built-on kitchens) and painted elements beneath the overhanging roofs. The town takes its name from the substantial baroque church of St. Martin which is visible from far away. We then hike downhill along the Gonjače-Dobrovo road towards Kozana, and we come to the road to Kozana in Travnik. We reach the village very quickly and can take a well-earned break beneath the chestnut trees in the centre of the village. We then continue onwards into the valley of the River Končnar. On the other side of the valley is Biljana, one of the largest places in the Goriška Brda. The chains of hills are scattered with vineyards, cherry orchards and several large olive groves with their typical greyish-green colour. Prior to the winter of 1928/29 there were many more olive trees here, but during this severe winter most of them fell victim to the cruel frost and no more olive trees were planted afterwards. However, there have recently been new planting initiatives. We stay on the left-hand side of the valley – surrounded by vineyards – until we cross the road and ascend towards Medana (185 metres), one of the best known places in the Goriška Brda. The reason why our ancestors gave the settlement below it the name ‘Breg’ (hill) becomes apparent as we are climbing up to it.

But do not worry, this is the last ascent. Afterwards we go downhill for a longer period of time to the former border crossing point at Plešivo, and from there we continue towards Krmin. But we are not in a hurry and can enjoy our last look at the wonderful view of the region, with Brda on our left, bordered by the Sabotin, the Trnovska Plateau behind us and even further away Nanos. Ahead of us lies the karst region, somewhat further away the gulf of Trieste, and the plains of Friuli on our right. When the sky is clear you can see the Dolomites and the Carnic Alps in the distance. Before the last segment of this stage through Brda we recommend taking a break in one of the inns in Medana or Plešivo/Plessiva.

From the Italian-Slovenian border crossing in Plessiva we follow the SR409. As soon as the road bends, we follow the signs for the Plessiva Nature Park. Via a vehicle track through the vineyards we come to the entrance to the park and thus into the woods of Plessiva. We take the path which leads uphill beside a small building (visitor centre). The path crosses a wide vehicle track and then continues uphill. We follow the mule track and keep to the left when the paths fork, to climb further and reach the mountain ridge. We continue along the mule track which runs along the ridge, now ascending less steeply. After a flat section we leave the mountain ridge along a mule track which leads downwards in a southerly direction into the villages of Novali and Montona. Then we go along the narrow asphalt road which leads from the district of “La Subida” along the spine of the Monte Quarin (marked CAI 99). Near the summit there is a car park which can be reached by car from Cormons. In clear weather there is a wonderful view from here. To finish the tour we have to go back down to “La Subida” or Cormons, where the next stage begins.

Lennart Garritsen
August 21, 2020 · Community
The route was beautiful, but scorching hot so we were happy we left early so as to avoid the peak of the heat. Beautiful wine landscapes and forgiving hills. Not too strenous but quite long stage. Sinage n to s was excellent but app navigation told a slightly different way. Smartno is small but exquisite.
Show more Show less
Comment

Jeff Miller
August 06, 2020 · Community
A lot of road walking for me. I missed the sign twice and just used Google maps to get back on the trail. Be careful after Medana. Easy to miss the turn. I ended up trudging down unexciting and sometimes dangerous road 409 for 5 km into Cormons.
Show more Show less
Thursday, August 6, 2020 6:52:38 PM
Photo: Jeff Miller, Community
Comment 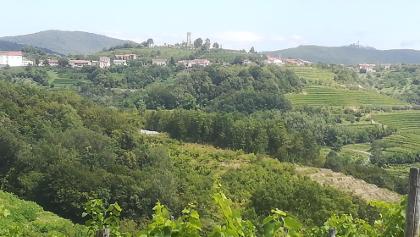